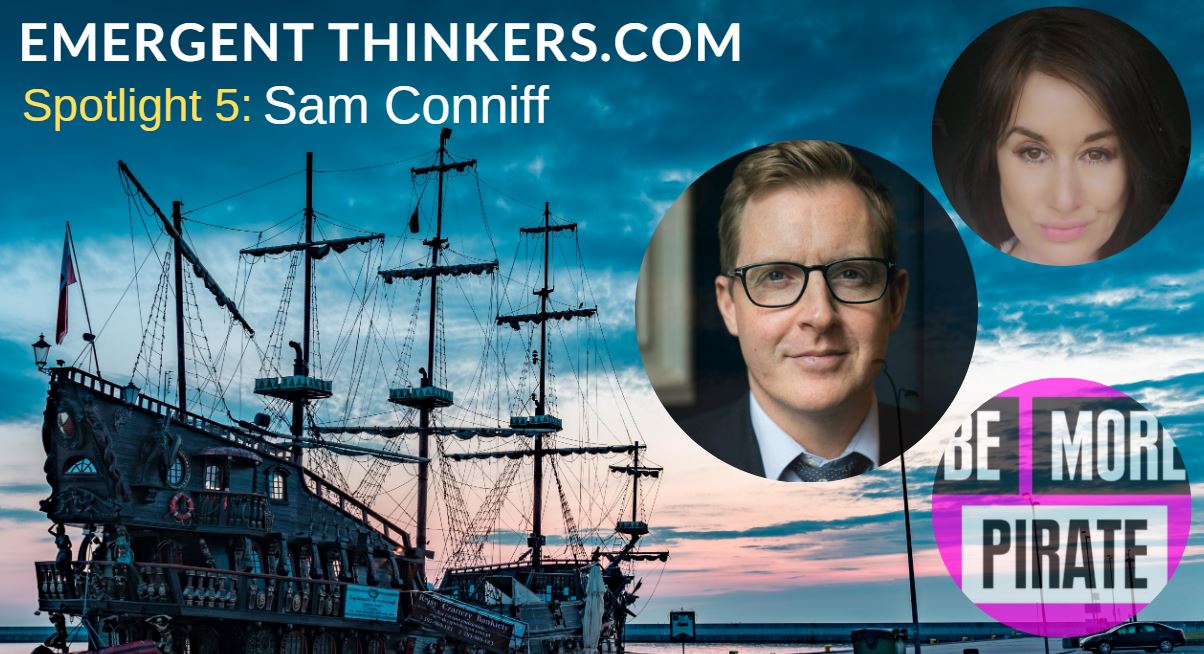 Following the impact of my first meeting with Sam at an Urban Foundry 51.6 event, as reported in my previous blog: 21st century pirate: the rebel with a cause I finally get to know more about the mind behind the global movement ‘Be More Pirate: How To Take on the World and Win’.

Sam, your multi-award winning book ‘Be More Pirate’ is famed for advocating professional rule-breaking in a rigged system, why is it so popular?

Honestly, its popularity was a surprise to me. I had been writing to vent my own frustrations. I’ve since realised that many people are in the same boat, pun intended. The pirate code gives people permission to speak up without fear. It gives legitimacy to the feeling many of us have, that things could be better. The history of pirates offers modern rebellion new energy, and a story that people can play an active role in.

Sam, you have a background in marketing and entrepreneurship, but what has contributed most to your current day thinking on social change and disruption?

Young people were the key inspiration for ‘Be More Pirate’.

Greta Thunberg and the youth climate activists continue to demonstrate to me that the leadership we lack at government level can be found in young people. Our youth will ensure social change will flourish.

You’ve claimed Anne Bonny (born Anne McCormac in 1702), the first woman pirate, as one of your favourites, but which pirate do you see as your primary role model?

Haha, probably Black Sam Bellamy, the Prince of Pirates, and Robin Hood of the Sea. The most merciful, he did a lot for the pirate cause in his short life, by calling out the hypocrisies of the establishment. And he delivered a damn good speech.

Pirates aside, which key thinkers, authors or activists inspire you?

‘Extinction Rebellion’ is doing an extraordinary job raising the alarm, in a positive way, on climate change. They employ a code of behaviour that challenges the powers that be, yet is underpinned with a sense of our social connectedness.

Recent books which have caused me to sit up and take note include ‘Winner Takes All’ by Anand Giridharadas, and ‘The Leaderless Revolution’ by Carne Ross.

Sam, do you think modern pirates are born, or shaped by life experience?

Life experience definitely. Adversity shakes you up. Direct experience of the pitfalls of a broken system means you can speak authentically and authoritatively. I’d be wary of anyone claiming to represent a cause or community they have no experience of.

In ‘Be More Pirate’ you highlight Wales as having a high proportion of pirates, why do you think this was?

Based on available data, the majority of historians agree that most pirates hailed from Wales. As for why, have you been to Wales?

[I smile, hailing from Wales]

There is a strong sense of independence, and a willingness to fight for it in Wales. As true today as it was 300 years ago. Wales birthed the Co-operative movement and the Labour movement. It seems wholly realistic a pirate community willing to fight for freedoms would have strong roots in Wales.

Sam, you state that Pirates were the original social entrepreneurs, but what would be their priority challenge today?

I believe the original pirates would acknowledge the climate crisis is a threat to humanity. Yet we shouldn’t see it in isolation to other areas of life. Everything is connected, so I stand united behind our brilliant cohort of healthcare pirates fighting to reform the system. We stand no chance without resilient healthcare services.

Personally, I bring my pirate skills to wherever I can add value. I work with businesses to help them reorganise around purpose, as that’s where my experience lies. Work out where you are most useful in changing the systems at the root, and focus on that.

Your pirate rebellions are gathering momentum, from climate change to fair-trade, any predictions on new areas ripe for disruption?

The one real rebellion we need doesn’t necessarily focus on one sector but has one common principle at its core, redistributing power. This is not about any kind of ideology, but simply facilitating people to take a more active role in the decision-making that affects them. I’m in favour of disrupting broken democratic processes to make way for more empowered ones,. For example, participatory budgeting, citizen forums, or other means that allow us to cooperate and share power, just as pirates did.

Sam, who would you handpick for a 21st-century rebellion crew to address the leadership crisis in the UK at present?

I could list some people who’ve already attracted attention for standing up to the status quo. The real leaders we need are out already out there, in the trenches. I’m amazed and humbled every time I meet people at workshops who are slogging away in our local authorities, in schools, hospitals, local businesses etc. I say this because the kind of re-organisation we need depends on people who are well connected, respected and already strong leaders in their communities or sectors. They reach people that traditional leadership can’t. We are going to need those critical connections more than ever before.

We talk about critical thinking, creativity and challenge being important for 4IR citizenship, what skills would you or your pirates prioritise for education to focus upon, for learners preparing for or entering the ‘rigged systems’?

Fundamentally education should not be a box-ticking exercise. In the end, doing as you’re told and ‘playing the game’ doesn’t lead to a meaningful, purpose-filled life. In my experience, it has created many miserable adults who have struggle to break free from the feeling that obedience equals success. Real-life is messier, more exciting and imaginative than what schools lead you to believe.

‘Passionate‘ is an adjective often used to describe you. Sam, how can we help our young channel passion positively and effectively?

One thing that’s been a joy and surprise in my life in the last two years is public speaking. It’s been a medium to channel my own excitement to inspire others. I’m dyslexic even though I’ve managed a book, but I think oral communication is undervalued. It could help many young people educate, inspire and communicate their own passions. Facts alone won’t change minds. You have to connect on a more subconscious level. I always try and understand where people are coming from. Storytelling is important too, as that’s how we respond to the world and process information.

What is your aspiration for ‘Be More Pirate’ or your Pirate Community in Education?

Two core things we need to get on the curriculum are climate activism, and mental health/resilience. I’m supporting any pirates working towards that. It’s interesting when someone comes up with an idea that can upend the system! One young pirate has developed a method that is able to accurately predict student grades based on their own perceptions. It looks at things like perception of the subject, the teacher etc., and it challenges everything about why we believe people succeed or fail at school.

You employ a range of media to convey your messages, which do you believe is the most effective in influencing and driving transformative change?

I don’t think there’s one best way. Media is always changing. It depends on who you’re trying to reach. The key is to be unexpected. Go where no one expects. There’s a quote in a book I stole from Banksy, along the lines of ‘don’t just go outside the box, cut up the box’.

“Think outside the box, collapse the box, and take a f***g sharp knife to it” – Banksy

Thank you, Sam, for taking time out to share your story with me today. May I meet you again, out on the stormy seas of change very soon. Possibly at the next Welsh gathering.

Before, you sail on, one last question. We are all familiar with the theme tune to the ‘Pirate of the Caribbean’ franchise. What song would you have playing heading out and towards action?

‘Warhead’ by Krust. I grew up on Rave, Hardcore and Jungle. It seems odd now I’m 40, but you never get over your first love.

7 Replies to “The mind behind 21c pirate rebellion”

© Felicity Healey-Benson and Emergent Thinkers.com ®.(2018-2020). Unauthorized use and/or duplication of this material without express and written permission from this site’s author and/or owner is strictly prohibited. Excerpts and links may be used, provided that full and clear credit is given to Felicity Healey-Benson and EmergentThinkers.com ® with appropriate and specific direction to the original content.